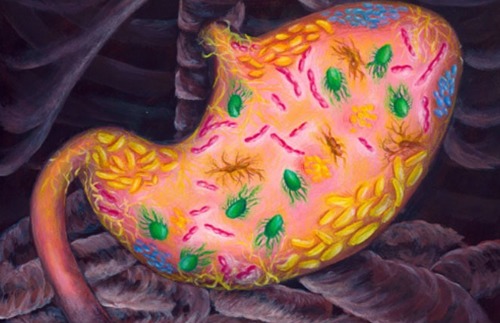 Most non contagious diseases are coming from our food, here’s why…

From healthy soil to healthy gut

Unwittingly, agriculture has been attacking the life forms in our soils through a chemical onslaught, tillage, leaving the soil bare and the repeated growth of the same monocrops. These vital lifeforms need air, water and living roots to feed from and do far better with a mixture of over seven species grown all together. It is these microbes that we now need to help us capture carbon in the soil and reverse both our climate and health crisis.

The massive reduction in diversity and numbers of soil microbes has negatively affected our gut health, as we aren’t ingesting so many. A 2019 study published in the journal Microorganisms, explained that the variety of microbes both in humans and in soils are plummeting at roughly the same rate and this simultaneous decline has been happening since the 1940’s.

The collection of microorganisms that live in our gut control inflammation, permeability of gut (leaky gut), brain chemistry, hormones, metabolism, nutrient levels and what you absorb and don’t absorb. They may well also affect food cravings, cancers and what your body does with fat. In fact, our gut microbes control so much of our health that many believe that most, non-contagious diseases, result from poor gut health, including; arthritis, heart disease, kidney disease, autoimmune disorders, chronic pain conditions, fatigue, irritable bowel syndrome, many skin conditions, autism, type 2 diabetes, food intolerances, plus anxiety, poor concentration and depression. The stomach is linked to the brain and between 70 and 80 percent of our immune system is in the gut!

Many farmers and NHS are only just waking up to this fact!

Fertilisers and pesticides are sold to our farmers as solutions but are causing problems for both our plants and ourselves!

Ordinarily, plants have to work to get the nutrients they need. They feed microbes through their roots and in return the microbes feed nutrients to the plant. (This action also helps sequestered carbon). If nitrogen, potassium and phosphorus is given in a fertiliser form, the plant doesn’t have to photosynthesise as much to produce the food for the microbes, the microbes aren’t fed and microbe numbers are reduced. Also, the plant loses out the other trace elements and minerals, ordinarily being fed along with the nitrogen etc, via the microbes. This makes the plant weaker and less able to fight pests and disease. It is then treated with pesticides to save it, which increases microbial loss further, killing good soil microbes as well as the bad ones!

Unlike minerals, vitamins & antioxidants are not supplied by the soil, so you cannot add them using fertilisers. They are produced by the plants themselves as a natural pest or disease defence mechanism. If using artificial pesticides, plants don’t have to produce these protective chemicals, so they are not in our food and we are missing out.

The application of pesticides (insecticides, herbicides, fungicides etc.) does not only take place while the crop is growing but can also be applied as a seed treatment, or post-harvest to assist with transportation, storage or for cosmetic reasons. Most of our beloved potatoes have an average of around thirty different active chemicals sprayed on them and wheat has over twenty!  Individually the chemicals we consume may not harm a healthy person but our reduced gut microbiome makes us weaker and therefore more likely to be adversely affected by them.

Soil ecologist, Dr Christine Jones is really concerned about the negative effect fertiliser has on the nutritional content of our food, particularly that a large proportion of it is grown in liquid or compost with no microbial life and therefore lack the nutrients which are difficult, expensive or indeed impossible to add artificially.

Our gut microbes, like soil microbes, thrive on a diversity of food sources. According to Slowfood, we have lost 94% of our vegetable varieties over the last 100 years and nearly half our calories come from just three crops!

We pay very little for our food in the UK and to be profitable, many are forced to produce food that grows as big and as fast as possible. This again reduces the nutritional content as they simply don’t have time to absorb as many nutrients.

“If a newborn baby grew as fast as your average supermarket chicken, by her third birthday she would weigh 28 stone,” according to Kate Parkes, RSPCA chicken welfare specialist.

Our animals, like ourselves, are increasingly eating foods that are neither natural or good for them. We are becoming obese as we are eating obese animals, over processed foods are reducing gut health and we have to eat more nutrient deprived fruit and veg to get the nutrients we need.

Mineral deficiency is estimated to afflict more than a third of humanity in all areas and 64% of adults in England are considered overweight or obese.  Diabetes is costing the UK £10 billion a year and causing over 500 premature deaths each week.