CARBON AND OTHER
GREENHOUSE GASSES (GHG)

Due to the imbalance of our Earth’s greenhouse gasses we urgently need to change our ways, in all areas, including land management, agriculture and food production. We must reduce agricultural GHG emissions from intensively farmed cattle, poorly managed manure and soil, fertiliser & pesticide use and production, rice cultivation, over-processing and packaging and through energy use. Our land though provides great opportunities.

The prospect of carbon capture

In short – by growing a mixture of crops and other plants, preferably from different plant families, more microbial life is supported. These microbes, working together, turn plant sugars, sent through roots and crop residues, into trapped, stable carbon in the form of humus. Keeping living roots in the soil to feed sugars to the microbes, including long, deep roots, ensures carbon is trapped, safely deep in the ground.

Adding compost or grazing animals can kick start an increased population of soil microbes which are necessary to do this work.

The nurturing of these microbes is vital work and is done through reducing ploughing and chemicals and protecting them with ground cover while keeping them fed!

Farming carbon = establishing, encouraging and nurturing microbes, with roots and organic matter to feed from. 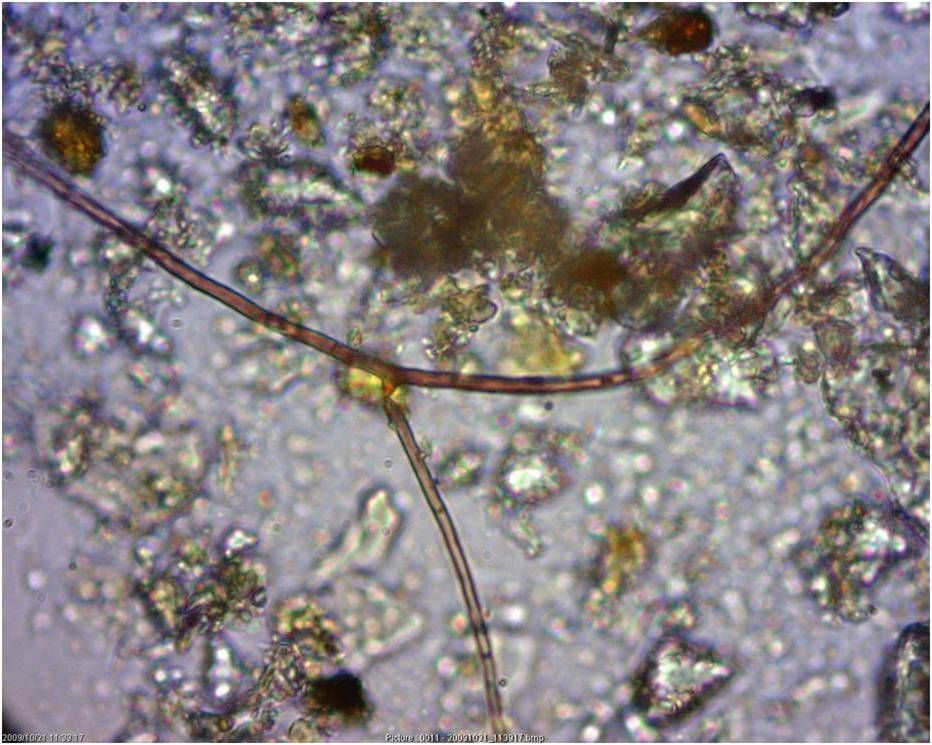 Bacteria and fungi that together help stabilise carbon in the soil.

A more detailed explanation – Carbon forms more chemical compounds than all other elements combined. It is the building block of life and our soils, which currently store more carbon than all the vegetation and our atmosphere combined, have the capacity to store a great deal more. It is the cheapest, most efficient carbon capture mechanism we currently have, capable of storing carbon far longer than trees, that is, unless used in the creation of quality timber structures. This process also offers a multitude of other benefits, including significant improvements to our health and biodiversity, both of which could do with a boost!

Over the years our cultivated soils have lost 50-70 percent of their original carbon content, due to cultivation, erosion, weathering, the use of chemicals and converting mixed species grasslands and forestland to cropland and mono species grazing land. Soil should contain around 28% organic matter, currently most of our soil contains less than 2%! (Ref 1). Modern agriculture unintentionally, tends to take more carbon out than it puts back in.

Our governments know this and many have signed up to the French initiative, 4/1000 (Ref 2) to boost carbon capture and reduce soil loss but they have the massive task of turning the mighty agricultural ship around and change needs to come both from the top down as well as the ground up!

A 2017 study estimated that, with better management, global croplands have the potential to store an additional 1.85 gigatons of carbon each year, which is as much as the global transportation sector emits annually. Some believe there is even more potential.

It is important to note that plants and microbial life also respire and naturally release CO2 and methane when they die. Our soils also release massive amounts of CO2, through oxidization, around ten times (Ref 2) as much as our fossil fuel use creates currently but this is massively increased through tillage and by leaving the soil bare.

Every 27 tonnes of carbon sequestered biologically in soil represents 100 tonnes of carbon dioxide removed from the atmosphere. If all farmland was a net sink rather than a net source for CO2, atmospheric CO2 levels would fall at the same time as farm productivity and watershed function improved. Indeed, this would solve the vast majority of our food production, environmental and human health ‘problems’.

You can see from the table above, the impressive difference in organic matter, organic carbon and the resulting water infiltration rates that regenerative agriculture offers. That infiltration rate is vital in helping us store water to cover dry periods, reducing the effects of flash floods which washes away some of our soil carbon also.

So, in order to increase soil organic matter (SOM) we can add carbon in the form of compost, plant residues and manures but we need a plethora of diverse lifeforms down there, in order to fix the carbon from these, into a stable form, that is trapped in the soil and is less likely to be eroded or washed away. Most of our soils are massively depleted in healthy numbers and mixtures of microbiology but they can be added with bio-active compost (see compost section in Learn More) and/ or with animal wee, poo and saliva. Once the microbes are in the soil, however, they need looking after. They need organic matter and sugars from plant roots to feed from and they need air to breath plus ground cover to protect them from the elements. Tillage, bare soil, compaction and chemicals all reduce microbial populations, in turn reducing aggregate and humus formation, reducing carbon capture.

Farming regeneratively and farming for carbon, is all about farming microbes!

There is also another way to get carbon into the ground and that is by better utilising the carbon pumps that plants provide.

Plants draw down CO2 from the air and through photosynthesis, turn it into sugars (carbo-hydrates or liquid carbon) to help build their leaves, bark, stems and roots. Plants also use this carbohydrate to feed microbes in the soil and in return the microbes feed the plants nutrients that the plants can’t otherwise access. It’s a two way, bartering system. The carbon that is fed to the microbes, the microbes then fix in the soil in a stable form.

One example of this is the relationship between roots and mycorrhizal fungi. This amazing fungi feeds from liquid carbon, in the form of carbohydrates, exuded from plant roots, not only for their own growth but also to build a bridges or tunnels from themselves to the root, through which nutrients can be exchanged. They use tiny particles formed by bacteria and a strong, sticky compound called glomalin for this bridge building which is a gluey substance. 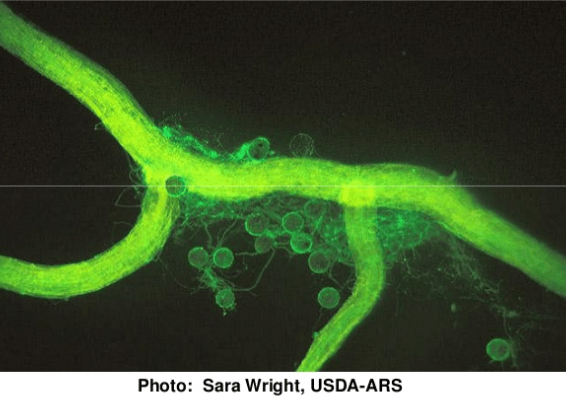 It helps stick and hold soil particles together at the bridge between root and fungal hyphae, to form soil aggregates. These aggregates are strong so that the nutrients, minerals, acids, organic matter etc is held together in a form that doesn’t erode or get washed away. These aggregates are also formed away from roots but less so and more tend to be formed in the presence of this magical fungi. These fungi can then turn these aggerates into humus, another stable form of carbon. The deeper the roots are the deeper and safer this humus is made, the less likely it is to be dug up and released though erosion and oxidisation.

The formation of humus requires a vast array of soil microbes, including mycorrhizal fungi, nitrogen fixing bacteria and phosphorus solubilising bacteria, all of which obtain their energy from plant sugars (liquid carbon).

Currently our soils are more bacteria dominant as they, unlike this type of fungi, survive tillage, being so small.

Experiments suggest that we can store 10x more carbon, yet, at the same time, only release 4x as much from that soil. These experiments also indicate that as you increase fungi, carbon and bacterial inputs, with relatively more fungi to bacteria, the soil releases relatively less CO2. The soil becomes more efficient in a way.

In conclusion – soil microbes are responsible for processing carbon coming from both dead plants and creatures containing carbon, plus the processing of carbohydrates exuded from plant roots. The processing of all this carbon stabilises it into aggregate and humate forms that can’t be eroded and washed away as easily. 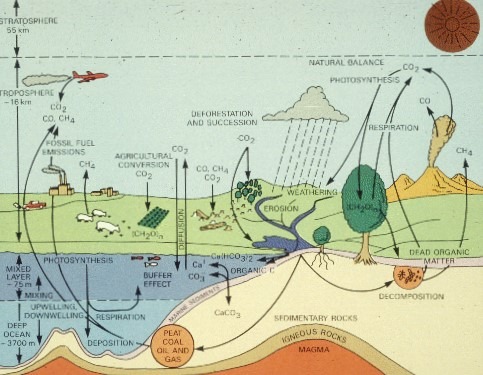 Methane and nitrous oxide are other dangerous greenhouse gases and both are produced on farms. Methane comes mainly from rice paddies, manure stockpiles and ruminant animals, such as cattle. It is a gas produced in anaerobic conditions.

These gases are of particular concern since they have a greater heat-trapping ability than CO2, meaning that increasing levels of nitrous oxide and methane gases have a greater effect on atmospheric temperature.

Water Vapour is the most potent contributor to the greenhouse effect!

Plants cool the Earth’s surface, take them away, as we do when we leave a field bare or cut down a woodland, and the temperature rises causing more evaporation and water vapour. Then, since water vapor is a greenhouse gas, this additional water vapor causes the temperature to go up even further—it’s a positive feedback. Water vapour feedback roughly doubles the amount of warming caused by CO2! 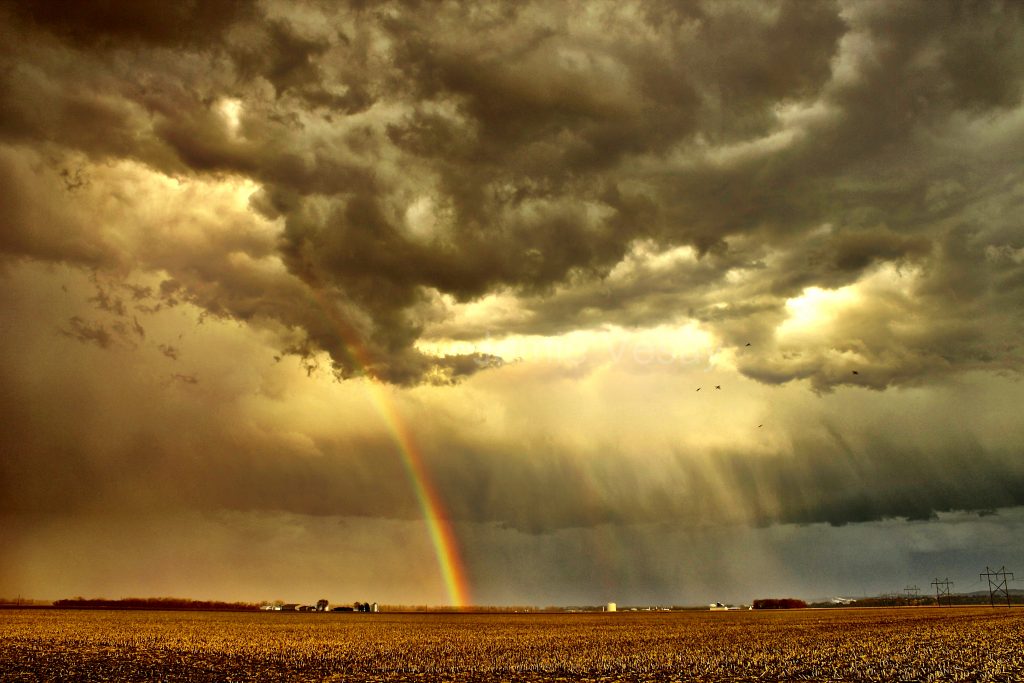 Plants manage water and in doing so, they manage heat. By cutting down forests for wood, palm oil etc we have heated the ground, rather than allowing transpiring plants to bounce the heat upwards. Regenerative agriculture encourages continuous multispecies plant growth, including trees and the covering of soil at all times, hence reducing this problem.

We need plant cover not only to cool temperatures of the air above the land but also, cooler soils respire less and therefore again helping reduce natural C02 emissions. 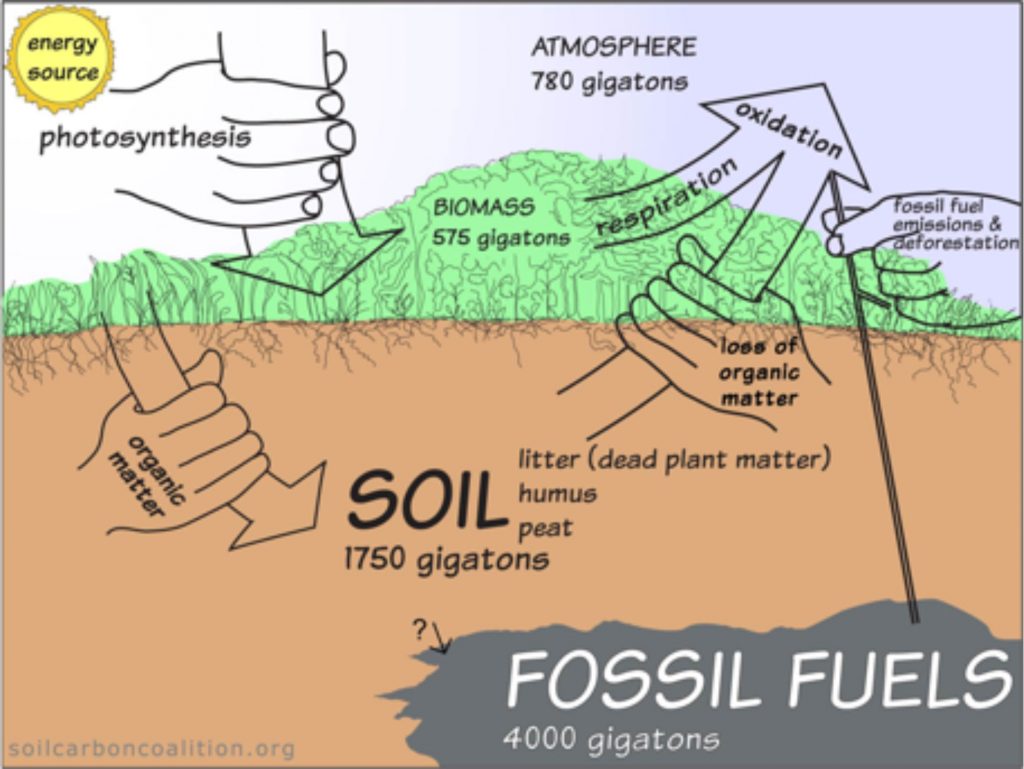